Well, everyone could have predicted this, but here it is anyway:

I finally got my grubby hands on a Brompton bicycle!

Yes, it was at great personal sacrifice to my bike fleet. A couple of dear favorites ended up on the block in order to make this happen. It wasn’t easy, but I’m trying to be realistic. Honestly, how many bikes do,I really need? Wait, don’t answer that because the answer is ALWAYS N+1.

But I’m trying to realistic here. And not leave my husband with a hoarders supply of bikes, bike parts, and other identifiable bike junk if I pre decease him, so my new bike rule is: If one comes in, one must go out. It’s kept my bike acquisition mania better controlled in the past few years.

This rule doesn’t, however, stop me from spending a lot of time searching for perfect bikes, dream bikes, bikes that would make the N+1 rule something that wouldn’t apply to me. Ha ha haaaaa. Yeah, right.

I won’t go into what I am searching for these days because it’s ridiculous ($$$$$$) and I am not that kind of cyclist (Eddy Merckx-oh my gaaaaaaaawwwwwd!)

I won’t admit how much of my productive day I waste on you you, Eddy

But there has been a bike that was haunting me. My folding bike.

It was a good looking little bike but in poor shape, with many critical broken parts and it weighed about 400 pounds. It made sense to sell it to someone who was willing to take all that on.

A few years later, a bit more downsizing-without regrets, and honestly, I’m pretty happy with what I have. Except I miss the folding bike. I really believe if it was in good shape, it would have been ridden often, probably would have been my commuter bike.

I’m a certain age. I’m not getting any younger. There will be a time-hopefully in the far far future-when I won’t be able to ride. With that logic, I bit the bullet and sold two more bikes. It was hard and I really felt regret. Until today. When I went for an evening bike ride on my new bike. My husband took the bad-ass picture of me riding. I know it looks tiny and a little silly, but this bike is so unbelievably fun and fast and comfortable that I do not care.

My brother commented that it looks like I wasn’t getting too far on my tiny bike, to which I answered, “Tiny bikes go magical places.” 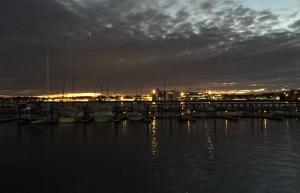 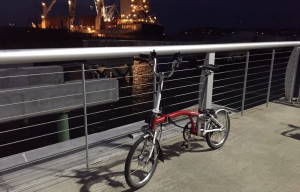