Boston Red Sox fan here, full of stupefaction and short on sleep. Forgive me if I make no sense.

The Will Middlebrooks Obstuction play that ended Game 3. Boston Globe 10/26/13

Followed by Game 4 with this:

Which makes for anything but a boring series.

Yet life continues despite my baseball obsession, lack of sleep and wide-ranging emotions. There is a sixteen year old son to feed because he is still running cross country, considering college and preparing for SATs among other things. There is a wonderful husband to badger about things flit across my consciousness like “I changed my mind, we do need a shelf in the bathroom and do you really think Middlebooks purposefully obstructed Allen Craig?”

Finally there are two spoiled rotten terriers that have absolutely NO consideration for my current fixation of the moment and act up to pull me right out of the things I should me concentrating on…like will Stephen Drew get a hit in this series?

It is because I am distracted and sleep deprived that I’ve been taking short cuts. It’s had little impact on Dan and Charlie…but the terriers…cutting corners with two pampered pooches…there is a price to pay for that.

Especially with this one: 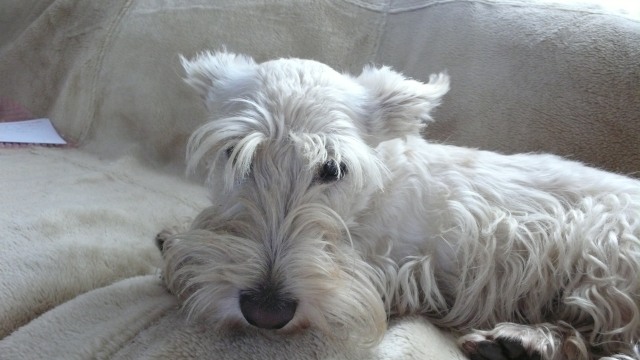 Honey. Don’t be fooled, at times she is pure evil.

You don’t bend the rules with Honey. You don’t turn your back for a minute, you don’t say, “Oh, just this one time…” because this little dog has been sprayed by a skunk four times. In the face. She tries to attack Pit Bulls, Rottweilers and German Shepherds every time we go for a walk…she believes she’d  take them all at once given the chance. She lunges at dump trucks and delivery vans. It’s a her daily goal to bite an old person. She would take a chomp out of a baby stroller if we didn’t keep her on a tight leash. She had to get a stuffed animal monkey head cut out of her small intestine because that stuffed monkey was going to be eaten no matter what. In a nutshell, Honey is a heart attack.

Last spring we moved away from a fenced-in yard which means the dogs have to be taken out on the leash first thing every morning–gone is the convenience of shoving them out the back door. What a pain.

We also now live across the street from two yappy Corgis called Nike and Apollo. Odd names for Welsh Corgis, especially since Nike is really fat and Apollo is, to put it simply, morbidly obese. Nike and Apollo derive their exercise from eating and barking. I think we’re good for them though. Since we moved back, Nike and Apollo have really upped their barking which is good for their cardiovascular health… but bad for nearly everyone else. They love to bark at Honey because of the great reaction. Their barking makes Honey absolutely insane. It’s quite a scene when Artie, Honey, Nike and Apollo are out at the same time. And I wonder why the neighbors aren’t friendly?

I try to time our walks to avoid Nike and Apollo. Thankfully they don’t just bark at Honey, they bark at everything so it’s not difficult to figure out when they are outside.

Yesterday morning I was tired, really tired. The game ended after midnight yet our spoiled dogs still had to start their day at the usual time: 5:30 a.m, regardless of a late bedtime. Lack of sleep clouded my judgement. It was dark and very quiet at 5:30, no one was up or out. I decided to just let them loose in the back yard because the main reason they get up so early is to for food, not terrorized–that’s what I told myself anyway.

Fat Apollo. Ready for anything.

The second Honey was out of my reach, Nike and Apollo started barking and she took off. I yelled, “Honey! No! Come back!” only to see her make a bee-line for Apollo, the fattest Corgi, and in my estimation, the easy target. I could see it all in slow motion and began to calculate how much this would cost us. It crossed my mind that we might even have to get rid of her as she sprinted toward the mini-sofa with a dog face. Apollo pivoted on his big fat belly and braced himself for the hit by trying to dig his feet into the sidewalk–quite a task I’m sure. The street erupted with barking and then there was a high-pitched shriek. A second later Honey came tearing back down the driveway and ran up the back steps.

I jogged over to the corgis who continued to shatter the early morning quiet with their screechy barks while their owner glared at me from his front porch. Neither Nike nor Apollo looked injured, in fact, they waddled around on their sidewalk with a little more swagger than I’d ever seen.  I called out, “Sorry!” and retreated to our house.

Honey was huddled in a heap on the back porch, shaking and cowering–which is something she does when she’s been REALLY bad. I started to yell at her then I noticed some blood on her face just beneath her left eye:

Apollo got her! My fear of getting sued evaporated, I became dumbstruck at Apollo’s gutsy move in the heat of a full-on attack. Thankfully he missed her eye but he managed to get a good chunk of skin and hair just beneath it. That will heal. The worst of her injuries right now is her pride. And her feelings are hurt, very hurt. There’s quite a bit of drama that implies she will never get over this. 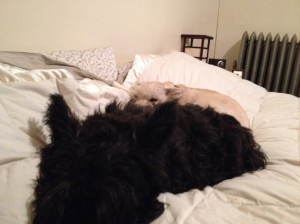 Cowering behind Artie? This is not Honey as we know her!

This could have been a major dog disaster.  She was aiming to plow into Apollo as if she was diving into a vat of butter. I have to give the Dread Apollo credit–as enormous as he is–he just planted himself for the onslaught, ready and waiting, and he emerged victorious.

Today has been quiet. She is managing to choke down her meals but she is subdued on our walks. She has been hiding behind Artie, sighing at my feet or cowering under blankets.

Beaten by Apollo…oh the horror and humiliation!

We shall use this brief hiatus of peace and quiet to think about tonight’s game.